👍
33
👎
Vlad III Dracula, better known as Vlad the Impaler, was ruler of Wallachia on and off from 1448 to 1476. There is still today a strong connection between the castle and the novel Dracula, by Bram Stoker. During Stoker's research on the region of Transylvania, he came across the brutal accounts of the atrocities committed by Vlad III. It was believed that he was imprisoned in Castle Bran. Does this claim stand-up to the scrutiny of historians? 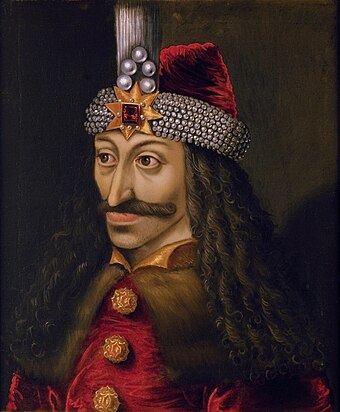 Bran Castle (Romanian: Castelul Bran; German: Törzburg; Hungarian: Törcsvár) is a castle in Bran, 25 kilometres (16mi) southwest of Brașov. It is a national monument and landmark in Romania. The fortress is on the Transylvanian side of the historical border with Wallachia, on road DN73.

Commonly known outside Romania as Dracula's Castle (although it is one among several locations linked to the Dracula legend, including Poenari Castle and Hunyadi Castle),[citation needed] it is often erroneously referred to as the home of the title character in Bram Stoker's Dracula.[citation needed] There is no evidence that Stoker knew anything about this castle, which has only tangential associations with Vlad the Impaler, voivode of Wallachia, the putative inspiration for Dracula.[citation needed] Dutch author Hans Corneel de Roos proposes as location for Castle Dracula an empty mountain top, Mount Izvorul Călimanului, 2,033 metres (6,670ft) high, located in the Călimani Alps near the former border with Moldavia.[full citation needed] Stoker's description of Dracula's crumbling fictional castle also bears no resemblance to Bran Castle.

The castle is now a museum dedicated to displaying art and furniture collected by Queen Marie. Tourists can see the interior on their own or by a guided tour. At the bottom of the hill is a small open-air museum exhibiting traditional Romanian peasant structures (cottages, barns, water-driven machinery, etc.) from the Bran region.

In 1212, the Teutonic Order built the wooden castle of Dietrichstein as a fortified position in the Burzenland at the entrance to a mountain pass through which traders had travelled for more than a millennium. This castle was destroyed by the Mongols in 1242.[citation needed]

The original name of the castle, Dietrichstein or lapis Theoderici in Latin, lit. 'Dietrich's Stone', seems to have been derived from the Comthur (Commander) and regional Preceptor, frater Theodericus, mentioned in a 1212 document. This Dietrich is the probable builder of the castle. A 1509 document confirms that the Törzburg county had once belonged to Commander Dietrich of the Teutonic Order.

The first documented mentioning of Bran Castle is the act issued by Louis I of Hungary on 19 November, 1377, giving the Saxons of Kronstadt (modern Brașov) the privilege to build the stone castle at their own expense and labour force; the settlement of Bran began to develop nearby. In 1438–1442, the castle was used in defense against the Ottoman Empire, and later became a customs post on the mountain pass between Transylvania and Wallachia. Although many castles of the time belonged to members of nobility, it has been established that Bran Castle was built almost exclusively for fortification and protection of German colonists in Transylvania.It is believed the castle was briefly held by Mircea the Elder of Wallachia (r. 1386–95, 1397–1418) during whose period the customs point was established. The Wallachian ruler Vlad Țepeș (Vlad the Impaler; 1448–1476) does not seem to have had a significant role in the history of the fortress, although he passed several times through the Bran Gorge. At some point Bran Castle belonged to the Hungarian kings, but due to the failure of King Vladislas II (r. 1471–1516) to repay loans, the city of Brașov regained possession of the fortress in 1533. Bran played a militarily strategic role up to the mid-18th century.

With the 1920 Treaty of Trianon, Hungary lost Transylvania, and the castle became a royal residence within the Kingdom of Romania after being given to the royal house by the Saxons of Kronstadt-Braşov, who had no more use for it and no interest in financing the time-damaged property. It became the favorite home and retreat of Queen Marie, who ordered its extensive renovation conducted by the Czech architect Karel Zdeněk Líman[cs]. The castle was inherited by her daughter Princess Ileana who ran a hospital there in World War II. It was later seized by the communist regime with the expulsion of the royal family in 1948.

In 2005 the Romanian government passed a law allowing restitution claims on properties illegally expropriated, such as Bran, and thus a year later ownership of the castle was awarded to American Dominic von Habsburg, the son and heir of Princess Ileana.

On 18 May 2006, after a period of legal proceedings, the castle was legally returned to heirs of the Habsburg family. However, the Romanian state, through the Ministry of Culture, was also to administer it for the next three years.

In September 2007 an investigation committee of the Romanian Parliament stated that the retrocession of the castle to Archduke Dominic was illegal, as it broke the Romanian law on property and succession. However, in October 2007 the Constitutional Court of Romania rejected the parliament's petition on the matter. In addition, an investigation commission of the Romanian government issued a decision in December 2007 reaffirming the validity and legality of the restitution procedures used and confirming that the restitution was made in full compliance with the law.

On 18 May 2009 administration of Bran Castle was transferred from the government to Archduke Dominic and his sisters, Baroness Maria Magdalena of Holzhausen and Elisabeth Sandhofer. On 1 June 2009 the Habsburgs opened the refurbished castle to the public as the first private museum in the country and presented in collaboration with Bran village a joint strategic concept to maintain their prominent role in the Romanian tourist circuit and to safeguard the economic base in the region.

Vlad III Dracula, better known as Vlad the Impaler, was ruler of Wallachia on and off from 1448 to 1476 Other than being colloquially known as the inspiration for Bram Stoker's titular character in the novel Dracula, Vlad III is known for committing brutal acts of war. In his reign he was under constant threat of attack from both Ottoman and Hungarian forces. During an infamous retreat from Ottoman forces, Vlad III had the bodies of his enemies and his citizens alike impaled on large spikes in the field surrounding his country. Not only did his fondness for impaling his victims earn him the nickname 'Vlad the Impaler', it also ensured his survival during the retreat, as the Ottoman forces returned home after seeing the grotesque scene Vlad III had prepared for them.

Though many myths have been connected to Vlad III in connection with the Dracula myth, most historians agree that Vlad III Dracula never set foot in Castle Bran. Castle Bran was neither a friendly place for Vlad III to visit, nor was it under his rule.

The castle was linked to Vlad III for various reasons. The castle had long been one linked to his imprisonment after he was captured by the Hungarians in 1462. It was believed that he was imprisoned in Castle Bran but historians now conclude that Vlad III was actually imprisoned in a fortress in Budapest. It is said by historians that Castle Bran was chosen to be the colloquial location of Vlad III's imprisonment as it is a more haunting and dramatic looking structure than other castles of the region. Historians and scholars alike have concluded that Vlad III likely never set foot in the castle. However, as there is a lack of written historical accounts from the region at that time, the idea cannot be completely discredited.

Although Vlad III may not have ever been to Castle Bran, there is still today a strong connection between the castle and the novel Dracula, by Bram Stoker. During Stoker's research on the region of Transylvania, he came across the brutal accounts of the atrocities committed by Vlad III It is said he directly used the name Dracula after reading on the subject, but that his inspiration for Dracula was not solely based upon the historical figure. It is said instead that it was largely due to American cinema that Vlad III i...