👍
50
👎
Perkeo of Heidelberg was a notable jester and court dwarf. He allegedly adopted the nickname “Perkeo” for his drinking habits, as he famously replied "perché no?" (“why not?” in Italian) when asked if he wanted another glass of wine. Contemporary accounts document that he regularly drank between five and eight US gallons of wine a day. Since he knew much about wine, he was also given the responsibility of looking after the castle’s wine stocks.
Perkeo the Dwarven Court Jester 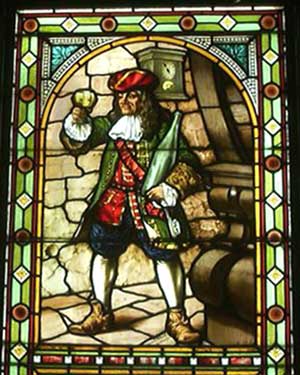 Heidelberg Castle (German: Heidelberger Schloss) is a ruin in Germany and landmark of Heidelberg. The castle ruins are among the most important Renaissance structures north of the Alps.

The castle has only been partially rebuilt since its demolition in the 17th and 18th centuries. It is located 80 metres (260ft) up the northern part of the Königstuhl hillside, and thereby dominates the view of the old downtown. It is served by an intermediate station on the Heidelberger Bergbahn funicular railway that runs from Heidelberg's Kornmarkt to the summit of the Königstuhl.

The earliest castle structure was built before 1214 and later expanded into two castles circa 1294; however, in 1537, a lightning bolt destroyed the upper castle. The present structures had been expanded by 1650, before damage by later wars and fires. In 1764, another lightning bolt caused a fire which destroyed some rebuilt sections.

Heidelberg was first mentioned in 1196 as 'Heidelberch'. In 1155 Conrad of Hohenstaufen was made the Count Palatine by his half-brother Frederick Barbarossa, and the region became known as the Electorate of the Palatinate. The claim that Conrad's main residence was on the Schlossberg (Castle Hill), known as the Jettenbühl, cannot be substantiated. The name 'Jettenbühl' comes from the soothsayer Jetta, who was said to have lived there. She is also associated with Wolfsbrunnen (Wolf's Spring) and the Heidenloch (Heathens' Well). The first mention of a castle in Heidelberg (Latin: 'castrum in Heidelberg cum burgo ipsius castri') is in 1214, when Louis I, Duke of Bavaria of the House of Wittelsbach received it from Hohenstaufen Emperor Friedrich II. The last mention of a single castle is in 1294. In another document from 1303, two castles are mentioned for the first time:

All that is known about the founding of the lower castle is that it took place sometime between 1294 and 1303. The oldest documented references to Heidelberg Castle are found during the 1600s:

All of these works are for the most part superficial and do not contain much information. In 1615, Merian's Topographia Palatinatus Rheni described Prince Elector Ludwig V as he 'started building a new castle one hundred and more years ago'. Most of the descriptions of the castle up until the 18th century are based on Merian's information. Under Ruprecht I, the court chapel was erected on the Jettenbühl.

When Ruprecht became the King of Germany in 1401, the castle was so small that on his return from his coronation, he had to camp out in the Augustinians' monastery, on the site of today's University Square. What he desired was more space for his entourage and court and to impress his guests, but also additional defences to turn the castle into a fortress.

After Ruprecht's death in 1410, his land was divided between his four sons. The Palatinate, the heart of his territories, was given to the eldest son, Ludwig III. Ludwig was the representative of the emperor and the supreme judge, and it was in this capacity that he, after the Council of Constance in 1415 and at the behest of Emperor Sigismund, held the deposed Antipope John XXIII in custody before he was taken to Burg Eichelsheim (today Mannheim-Lindenhof).

On a visit to Heidelberg in 1838, the French author Victor Hugo took particular pleasure in strolling among the ruins of the castle. He summarised its history in this letter:

But let me talk of its castle. (This is absolutely essential, and I should actually have begun with it.) What times it has been through! Five hundred years long it has been victim to everything that has shaken Europe, and now it has collapsed under its weight. That is because this Heidelberg Castle, the residence of the counts Palatine, who were answerable only to kings, emperors, and popes, and was of too much significance to bend to their whims, but couldn't raise his head without coming into conflict with them, and that is because, in my opinion, that the Heidelberg Castle has always taken up some position of opposition towards the powerful. Circa 1300, the time of its founding, it starts with a Thebes analogy; in Count Rudolf and Emperor Ludwig, these degenerate brothers, it has its Eteocles and its Polynices [warring sons of Oedipus]. Then the prince elector begins to grow in power. In 1400 the Palatine Ruprecht II, supported by three Rhenish prince electors, deposes Emperor Wenceslaus and usurps his position; 120 years later in 1519, Count Palatine Frederick II was to create the young King Charles I of Spain Emperor Charles V.

The castle as it appears in the Thesaurus Pictuarum, circa 16th century.

The castle and town, by Matthäus Merian.

Plan of the Castle and its Defenses from 1622.

Castle with the Hortus Palatinus, circa 1650.

It was during the reign of Louis V, Elector Palatine (1508–1544) that Martin Luther came to Heidelberg to defend one of his theses (Heidelberg Disputation) and paid a visit to the castle. He was shown around by Louis's younger brother, Wolfgang, Count Palatine, and in a letter to his friend George Spalatin praises the castle's beauty and its defenses.

In 1619, Protestants rebelling against the Holy Roman Empire offered the crown of Bohemia to Frederick V, Elector Palatine who accepted despite misgivings and in doing so triggered the outbreak of the Thirty Years War. It was during the Thirty Years War that arms were raised against the castle for the first time. This period marks the end of the castle's construction; the centuries to follow brought with them destruction and rebuilding.

After his defeat at the Battle of White Mountain on 8 November 1620, Frederick V was on the run as an outlaw and had to release his troops prematurely, leaving the Palatinate undefended against General Tilly, the supreme commander of the Imperial and Holy Roman Empire's troops. On 26 August 1622, Tilly commenced his attack on Heidelberg, taking the town on 16 September, and the castle few days later.

When the Swedes captured Heidelberg on 5 May 1633 and opened fire on the castle from the Königstuhl hill behind it, Tilly handed over the castle. The following year, the emperor's troops tried to recapture the castle, but it was not until July 1635 that they succeeded. It remained in their possession until the Peace of Westphalia ending the Thirty Years War was signed. The new ruler, Charles Louis (Karl Ludwig) and his family did not move into the ruined castle until 7 October 1649.

Victor Hugo summarized these and the following events:

In 1619, Frederick V, then a young man, took the crown of the kings of Bohemia, against the will of the emperor, and in 1687, Philip William, Count Palatine, by then an old man, assumes the title of prince-elector, against the will of the king of France. This was to cause Heidelberg battles and never-ending tribuluations, the Thirty Years War, Gustav Adolfs Ruhmesblatt and finally the War of the Grand Alliance, the Turennes mission. All of these terrible events have blighted the castle. Three emperors, Louis the Bavarian, Adolf of Nassau, and Leopold of Austria, have laid siege to it; Pio II condemned it; Louis XIV wreaked havoc on it.

After the death of Charles II, Elector Palatine, the last in line of the House of Palatinate-Simmern, Louis XIV of France demanded the surrender of the allodial title in favor of the Duchess of Orléans, Elizabeth Charlotte, Princess Palatine who he claimed was the rightful heir to the Simmern lands. On 29 September 1688, the French troops marched into the Palatinate of the Rhine and on 24 October moved into Heidelberg, which had been deserted by Philipp Wilhelm, the new Elector Palatine from the line of Palatinate-Neuburg. At war against the allied European powers, France's war council decided to destroy all fortification...