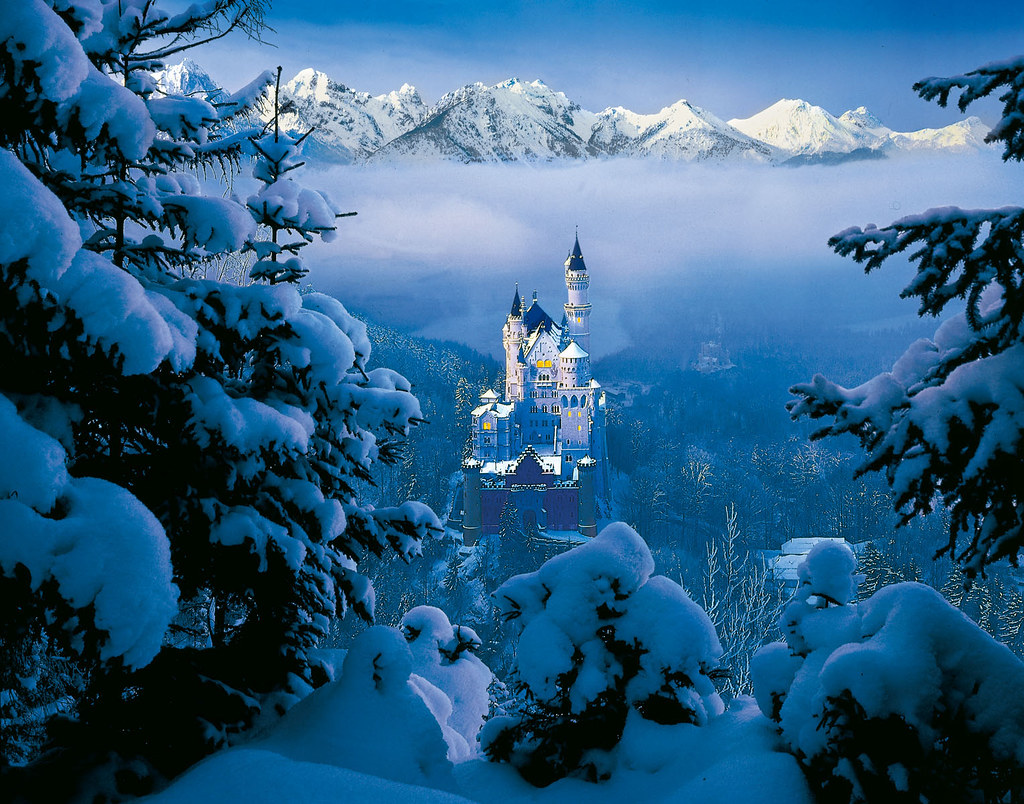 Neuschwanstein Castle (German: Schloss Neuschwanstein, pronounced[ˈʃlɔs nɔʏˈʃvaːnʃtaɪn], Southern Bavarian: Schloss Neischwanstoa) is a 19th-century Romanesque Revival palace on a rugged hill above the village of Hohenschwangau near Füssen in southwest Bavaria, Germany. The palace was commissioned by King Ludwig II of Bavaria as a retreat and in honour of Richard Wagner. Ludwig paid for the palace out of his personal fortune and by means of extensive borrowing, rather than Bavarian public funds.

The castle was intended as a home for the King, until he died in 1886. It was open to the public shortly after his death. Since then more than 61 million people have visited Neuschwanstein Castle. More than 1.3 million people visit annually, with as many as 6,000 per day in the summer.

The municipality of Schwangau lies at an elevation of 800m (2,620ft) at the southwest border of the German state of Bavaria. Its surroundings are characterised by the transition between the Alpine foothills in the south (toward the nearby Austrian border) and a hilly landscape in the north that appears flat by comparison.

In the Middle Ages, three castles overlooked the villages. One was called Schwanstein Castle.[nb 1] In 1832, Ludwig's father King Maximilian II of Bavaria bought its ruins to replace them with the comfortable neo-Gothic palace known as Hohenschwangau Castle. Finished in 1837, the palace became his family's summer residence, and his elder son Ludwig (born 1845) spent a large part of his childhood here.

In the 19th century, many castles were constructed or reconstructed, often with significant changes to make them more picturesque. Palace-building projects similar to Neuschwanstein had been undertaken earlier in several of the German states and included Hohenschwangau Castle, Lichtenstein Castle, Hohenzollern Castle, and numerous buildings on the River Rhine such as Stolzenfels Castle. The inspiration for the construction of Neuschwanstein came from two journeys in 1867—one in May to the reconstructed Wartburg near Eisenach, another in July to the Château de Pierrefonds, which Eugène Viollet-le-Duc was transforming from a ruined castle into a historistic palace.[nb 3]

The King saw both buildings as representatives of a romantic interpretation of the Middle Ages, as well as the musical mythology of his friend Wagner, whose operas Tannhäuser and Lohengrin had made a lasting impression on him.

In February 1868, Ludwig's grandfather King Ludwig I died, freeing the considerable sums that were previously spent on the abdicated King's appanage.[nb 4] This allowed Ludwig II to start the architectural project of building a private refuge in the familiar landscape far from the capital Munich, so that he could live out his idea of the Middle Ages.

It is my intention to rebuild the old castle ruin of Hohenschwangau near the Pöllat Gorge in the authentic style of the old German knights' castles, and I must confess to you that I am looking forward very much to living there one day [...]; you know the revered guest I would like to accommodate there; the location is one of the most beautiful to be found, holy and unapproachable, a worthy temple for the divine friend who has brought salvation and true blessing to the world. It will also remind you of 'Tannhäuser' (Singers' Hall with a view of the castle in the background), 'Lohengrin'' (castle courtyard, open corridor, path to the chapel)...

The building design was drafted by the stage designer Christian Jank and realised by the architect Eduard Riedel. For technical reasons, the ruined castles could not be integrated into the plan. Initial ideas for the palace drew stylistically on Nuremberg Castle and envisaged a simple building in place of the old Vorderhohenschwangau Castle, but they were rejected and replaced by increasingly extensive drafts, culminating in a bigger palace modelled on the Wartburg. The king insisted on a detailed plan and on personal approval of each and every draft. Ludwig's control went so far that the palace has been regarded as his own creation, rather than that of the architects involved.

Whereas contemporary architecture critics derided Neuschwanstein, one of the last big palace building projects of the nineteenth century, as kitsch, Neuschwanstein and Ludwig II's other buildings are now counted among the major works of European historicism. For financial reasons, a project similar to Neuschwanstein– Falkenstein Castle– never left the planning stages.

The palace can be regarded as typical for nineteenth-century architecture. The shapes of Romanesque (simple geometric figures such as cuboids and semicircular arches), Gothic (upward-pointing lines, slim towers, delicate embellishments) and Byzantine architecture and art (the Throne Hall décor) were mingled in an eclectic fashion and supplemented with 19th-century technical achievements. The Patrona Bavariae and Saint George on the court face of the Palas (main building) are depicted in the local Lüftlmalerei style, a fresco technique typical for Allgäu farmers' houses, while the unimplemented drafts for the Knights' House gallery foreshadow elements of Art Nouveau. Characteristic of Neuschwanstein's design are theatre themes: Christian Jank drew on coulisse drafts from his time as a scenic painter.

The basic style was originally planned to be neo-Gothic but the palace was primarily built in Romanesque style in the end. The operatic themes moved gradually from Tannhäuser and Lohengrin to Parsifal.

In 1868, the ruins of the medieval twin castles were completely demolished; the remains of the old keep were blown up. The foundation stone for the palace was laid on 5 September 1869; in 1872 its cellar was completed and in 1876, everything up to the first floor, the gatehouse being finished first. At the end of 1882 it was completed and fully furnished, allowing Ludwig to take provisional lodgings there and observe the ongoing construction work. In 1874, management of the civil works passed from Eduard Riedel to Georg von Dollmann. The topping out ceremony for the Palas was in 1880, and in 1884, the King was able to move in to the new building. In the same year, the direction of the project passed to Julius Hofmann, after Dollmann had fallen from the King's favour.

The palace was erected as a conventional brick construction and later encased in various types of rock. The white limestone used for the fronts came from a nearby quarry.

The sandstone bricks for the portals and bay windows came from Schlaitdorf in Württemberg. Marble from Untersberg near Salzburg was use...