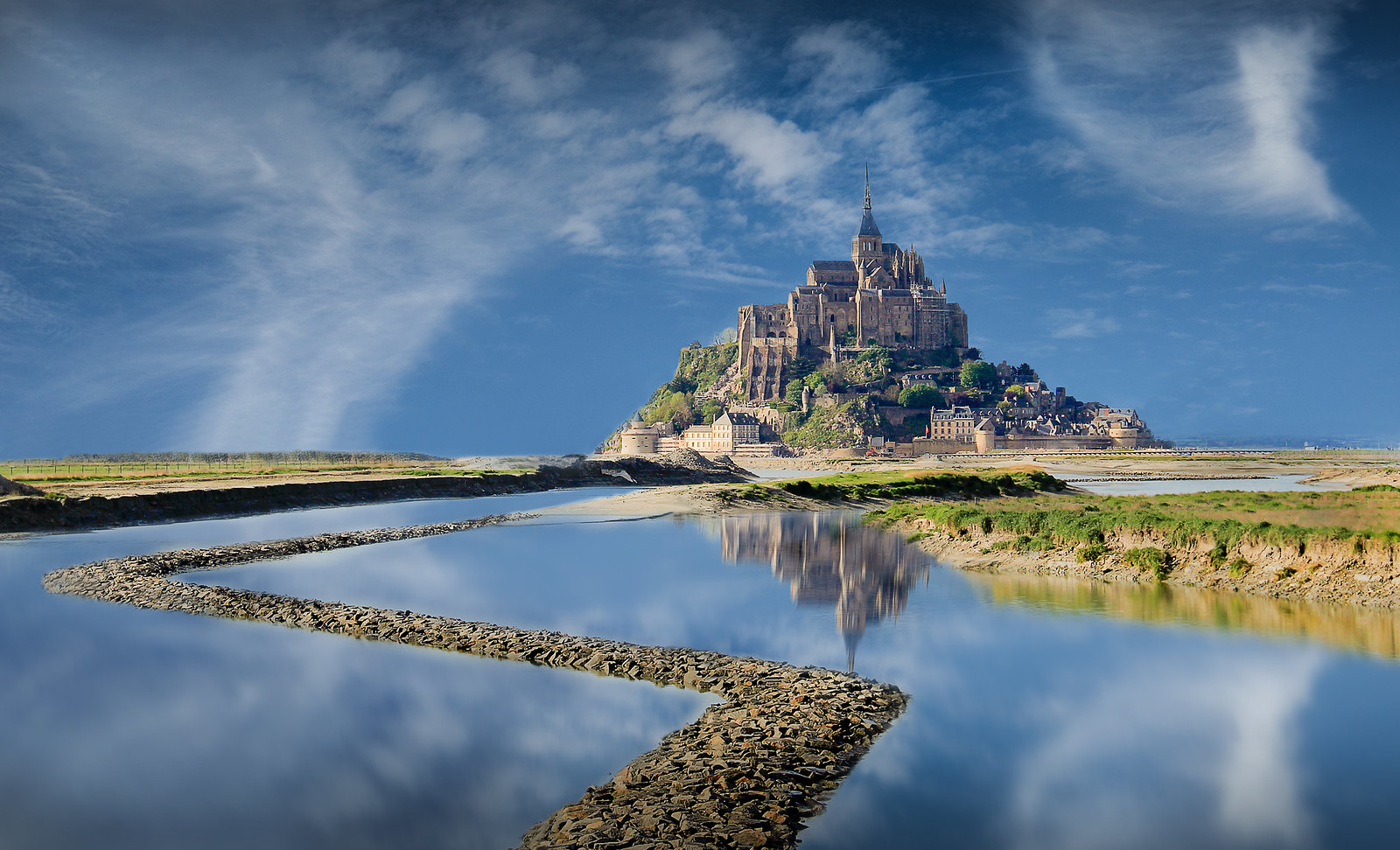 The abbey is an essential part of the structural composition of the town the feudal society constructed. On top, God, the abbey, and monastery; below this, the Great halls, then stores and housing, and at the bottom (outside the walls), fishermen's and farmers' housing.

The abbey has been protected as a French monument historique since 1862. Since 1979, the site as a whole – i.e., the Mont Saint-Michel and its bay – has been a UNESCO world heritage site and is managed by the Centre des monuments nationaux.

With more than 1.335 million visitors in 2010, the abbey is among the most visited cultural sites in France.

The first text about an abbey is the 9th-century Latin text Revelatio ecclesiae sancti Michaelis in monte Tumba written by a chanoine living at Mont Saint Michel or at the Cathédrale Saint-André d'Avranches. This text was written at a time of power struggle between Brittany and the County of Normandy against Francia as well as during canon law reforms by Roman emperors.

When Christianity expanded to the area, around the 4th century, Mont Tombe – the original name of Mont Saint Michel – was part of the Diocese of Avranches. By the middle of the 6th century, Christianity had a stronger presence in the bay. By this time, Mont Tombe was populated by religious devotees – hermits (probably some Celtic monks) supplied by the curé of Astériac, who took care of the site and led a contemplative life around some oratories. The hermits Saint Pair and Saint Seubilion dedicated one of the oratories to Saint Étienne, midway through the mont, and one to Saint Symphorien, at the foot of the rock.

In 710, Mont Tombe was renamed Mont Saint Michel au péril de la Mer ('Mount Saint Michael at the peril of the sea') after an oratory was erected to Saint Michael by bishop Saint Aubert of Avranches in 708. According to the legend, Aubert received, during his sleep, three times the order from Saint Michael to erect an oratory on the Mont Tombe. The archangel was reputed to have left his finger mark on Aubert's skull. This skull is displayed at the Saint-Gervais d'Avranches basilica with such a scar on it.

This sanctuary should be, according to the archangel, a replica of the Gargano in Italy (from the 5th century). Aubert had a local religious artifact removed and instead a circular sanctuary built, made of dry stones. Around 708, Aubert sent two monks to get some artifacts from the Italian sanctuary Gargano (a rock with his foot print and a piece of tissue from the altar). During this mission, the March 709 tsunami is supposed to have destroyed the Scissy forest and turned the Mont into an island. On October 16, 709, the bishop dedicated the church and put twelve chanoine there. The Mont-Saint-Michel was born.

The first buildings became too small and under the Western Roman Empire multiple buildings were added. Charlemagne chose Saint Michel as a protector of his empire during the 9th century and tried to have the place renamed Mont-Saint-Michel, but during the Middle Ages it was usually called Saint-Michel-aux-Deux-Tombes (Saint Michel with two tombs) (Mons Sancti Michaelis in periculo maris, in reference to Tombelaine).

The Mont-Saint-Michel monks, during the first century of their institution, venerated the archangel Michael. The Mont became a place of prayer and study, but the stability period, known as the Neustria, during the reign of Charlemagne ended when he died. As the rest of Gaule was fighting invasions, religion and science found some welcoming in the diocese of Avranches and at the Mont-Saint-Michel.

At first, pilgrims kept coming to the Mont. After the Vikings captured the Mont in 847, the monks departed. But, as an island, it offered some protection for the local population and thus never stayed empty.

After the signature of the treaty of Saint-Clair-sur-Epte, Rollo (Gange-Hrólfr 'Rollo' Ragnvaldsson de Normandie) started repairing the damages inflicted to the religious buildings. He generously financed the Mont and called back the monks displaced by the war, returning the Mont to its previous condition.

The wealth and support that the Mont suddenly obtained from Rollo started to fundamentally affect its inhabitants, taking them away from their solitary, religious life. After William I of Normandy took over his father's title as Duke of Normandy in 927, he expanded his support toward monasteries until his assassination in 932; but his wealth, from which they benefited, further exacerbated their mundane life style. Because of their generous contributions to the Mont, the Dukes of Brittany Conan 1st, who died in 992, and Geoffrey 1st, who died in 1008, were buried in the Mont as benefactors.

The rapid growth of wealth of the church-abbey Saint-Michel became an obstacle to its function and nature. The religious used their wealth, coming from the piety of the rich surrounding princes, to satisfy their pleasures. Local nobles tried to obtain the favors of the Mont's religious inhabitants to spend it on meals, travels, and hunting in their company, which became their main occupation.

When Richard 1st, son of William 1st, became duke of Normandy, he tried, using his authority, to return them to a more monastic life. After failing to do so, and with the approbation of pope John XIII and king Lothair, he decided to replace them with a monastery of the Benedict order, as mentioned in Introductio monachorum ('the installation of the monks'), a treaty written around 1080-1095 by a Mont-Saint-Michel monk trying to defend the independence of the monastery toward the state.

After getting the approval from the local warlords and religious of the Norman abbeys, the monastery of Saint-Wandrille, Saint-Taurin-d’Évreux and Jumièges, Duke Richard I sent an officer and some soldiers to the Mont Saint Michel to announce his order: return to a religious life style and become a member of the Benedict order or leave the Mont. Only one accepted and all the others left, leaving the abbot Maynard 1st, coming from Saint-Wandrille abbey, to establish a Benedict ruling. The installation of the Benedictine monks took place in 966, which is marked as the founding year of the Mont-Saint-Michel Abbey. Those monks added the double-nave, pre-Romanesque church Notre-Dame-sous-Terre.

William de Volpiano, the Italian architect who had built the Abbey of Fécamp in Normandy, was chosen by Richard II of Normandy to build the church of the abbey in 1060. He designed the Romanesque church of the abbey, placing the transept crossing at the top of the mount. Many underground crypts and chapels had to be built to compensate for this weight, forming the basis for the supportive upward structure that can be seen today.

The Mont-Saint-Michel was at its apex during the 1100s, with the abbot of Torigni, private counsel of the Duke of Normandy, Henry II of England, reinforcing the structure of the buildings, and building the main facade of the church.

In 1204, France's King Philippe-Auguste started to take over the fiefs of Duke of Normandy John Lackland. His ally, Guy of Thouars, Duke of Brittany, undertook the siege of the Mont-Saint-Michel. After having set fire to the village and massacring the population, he failed to conquer the abbey, due to its stone fortifications. But the fire from the village extended to the abbey and damaged it significantly.

Horrified by the exaction of his Brittany ally, Philippe-Auguste offered abbot Jourdain a grant for th...